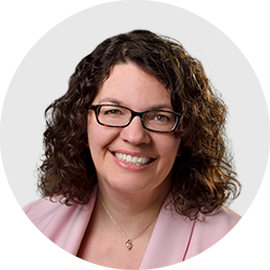 Professor Missmer received her Bachelor's degree in Biology from Lehigh University and her Master (SM) and Doctor of Science (ScD) degrees in Epidemiology from Harvard School of Public Health.

She joined the Nurses’ Health Study (NHS) Research Group at Harvard University in 1998, and was appointed as a tenure track faculty member at Harvard Medical School and School of Public Health in 2003.

In 2007, Dr. Missmer joined the International EndoGene Consortium as the US Principal Investigator – combining resources for GWAS discovery of endometriosis with Australia PI, Dr. Grant Montgomery, and UK PI, Dr. Krina Zondervan. Professor Missmer was appointed to the World Endometriosis Research Foundation (WERF) Board of Trustees in 2011 and serves as the Secretary for WERF America. She was elected Treasurer of the World Endometriosis Society (WES) Executive Board in 2017.

In 2012, Dr. Missmer co-founded the Boston Center for Endometriosis with Dr. Marc Laufer and serves as the Scientific Director where she designed and leads the Women’s Health Study: from Adolescence to Adulthood (A2A).  In that same year, along with Co-PI, Dr. Zondervan, and with the support of WERF, she launched the Endometriosis Phenome and Biobanking Harmonization Project (WERF EPHect).

In 2016, Dr. Missmer was the first faculty member to be endowed through Michigan State University’s Global Impact Initiative.