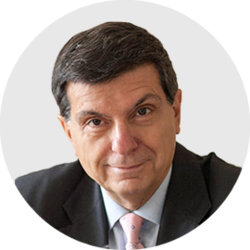 Professor and Chair of the Department of Obstetrics and Gynecology, University of Perugia, Italy
Work Experience: 40+ years’ experience in perinatal medicine

“When I chose my residency I was always fascinated by the undiscovered world (at that time) of the conceptus: so I witnessed the development of the fetal medicine and I contributed to it.”

Prof. Di Renzo, MD, PhD, FRCOG (hon) FACOG (hon) FICOG (hon), is Professor and Chair of the Department of Obstetrics and Gynecology at the University of Perugia in Italy.

Prof. Di Renzo is Director of both the Reproductive and Perinatal Medicine Center in Perugia and founder of the Permanent International and European School of Perinatal and Reproductive Medicine (PREIS) in Florence.

He is coordinating the Women's Library of FIGO after being General Secretary for two terms (2012-2018).

Prof. Di Renzo has a number of memberships:

He holds multiple positions in publishing:

Prof. Di Renzo is an Honorary Professor and Doctor Honoris Causa at 16 different Universities throughout Europe, Asia, South America, and the United States.

He is a full Professor at the Dept of Obstetrics and Gynecology at the I.M. Sechenov First State University of Moscow since 2019 and an Academic Member of the Romanian and Russian Academy of Sciences.

Among his academic achievements are:

Prof. Di Renzo’s scientific production comprises over 1,300 papers of which more than 400 have been published in peer-reviewed international journals and 82 books.

“Curiosity and dedication to teaching are my passions. I am always driven by the possibility to educate and train new residents and give them the best which I know of the specialty. For patients I am always challenged by difficult cases and to find new ways to manage complicated situations in order to bring them to a positive solution.”