Benefits of doing yoga on period

Yoga is a practice of obtaining, holding and perfecting different positions called asanas. The majority of the asanas that you will find in yoga are inversion positions. That’s why doing yoga during your period has been controversial and many believe that you should avoid it completely during this time. Others feel that some positions should be limited or avoided.

Women tend to look at their period in different ways. Some women choose to ignore it and go on with their daily activities as if it’s nothing. Other women get very upset. They want to curl up in a ball and “hide” until the pain, suffering, and inconvenience is over, while other women look at the menstrual cycle as something unclean, associated with guilt and negative emotions. Whatever your perception is of your period, yoga may help with the symptoms that you are experiencing.

If you are too uncomfortable to practice full yoga moves, perhaps some deep breathing, gentle stretching and Om chanting may be more beneficial for you. If you feel that yoga on your period might be right for you, it can help to alleviate back pain and cramping by widening the pelvic opening. This helps to reduce any congestion. It is also beneficial for balancing emotions that may cause irritability, mood swings, depression, anxiety or anger. A recent study found that yoga was able to significantly reduce moderate to severe pain, abdominal swelling, and breast tenderness associated with the participant’s menstrual cycles. Another study found that women that added yoga to their normal routine two times per week for twelve weeks, had significant improvement in menstrual pain, physical fitness, and quality of life.

It probably would not be advisable to practice “hot yoga” during this time as it may cause some of the symptoms that you are trying to avoid or alleviate. If you are thinking that it might “kill two birds with one stone” and help you to lose some weight at the same time, excess sweating during exercise doesn’t really work. Be advised though, the following poses should be avoided while doing yoga on your period. 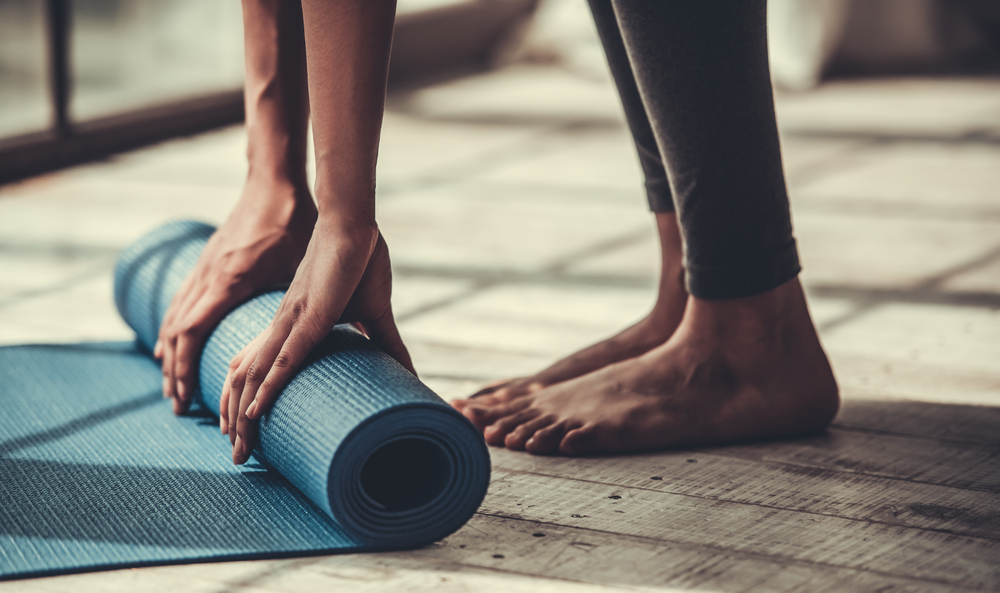 Yoga on your period: poses to avoid

Some individuals who practice yoga feel that there is a spiritual reason that inversion poses should be avoided during menstruation. This is because these positions go against the normal flow of energy during this time, could stop or disturb the flow and possibly lead to other reproductive problems later on.

The physiological reason to avoid inversion poses is that the uterus is pulled toward the head during these positions. This can cause the broad ligaments that support this organ to stretch and cause a partial collapse of the veins that carry the blood supply away from the uterus. By doing so, it can lead to vascular congestion and increased bleeding. This is due to the fact that the arteries that supply the uterus continue to pump blood into the area.

The third reason is a very simple one. Some of the poses involve strong stretching, twisting and even backbends that could put additional stress on the pelvis and abdominal region. This is the last thing you want to do if you are already experiencing discomfort during your period. The following are asanas (poses) that should be avoided while doing yoga on your period.

The handstand asana is also known as adho mukha vrksasana (Sanskrit) or mountain pose is not a beginner pose and is most definitely an inversion pose. It is also considered as a strengthening and balancing pose. This asana is just as it sounds. Hands on the ground, head down and feet up in an unsupported (not against anything) handstand. The translation from Sanskrit is: adho mukha = "face downward", (adho = "downward"; mukha = "face") and vrksa = "tree".

The headstand asana is also known as salamba sirsasana or the supported headstand. The translation from Sanskrit is: salamba = "with support", (sa = "with" alamba = "support") and sirsa = "head". This is a position in which the support comes from your hands and forearms, not a wall. The top of your head is positioned on the floor, the hands are interlaced behind the head and the forearms are resting on the floor with your elbows bent. The rest of your body is positioned vertically toward the ceiling. This is slightly less difficult than the handstand but should still be avoided because it is an inversion pose.

Shoulder stand pose, salamba sarvangasana, or supported shoulder stand. This inversion asana’s name is taken from Sanskrit and is translated as: salamba = "with support" (sa = "with" alamba = "support"), sarva = "all" and anga = "limb". To achieve this position, you lay on your back and through a series of steps you raise your legs toward the ceiling with just part of your upper back and your shoulders remaining on the floor. The lower back and hips are then supported by your arms. Arms are bent with the upper arm on the floor and hands on the lower back. Once again, the head is down, and feet are up.

The full wheel asana is also called the Upward Bow pose. In Sanskrit, it is referred to as urdhva dhanurasana that means: urdhva = "upward" and dhanur = "bow". This is a common “move” in gymnastics as well but is called a bridge. To perform this inversion position, you lay with your back on the floor. The hands (palms) and feet are then placed on the floor and the back is arched causing the abdomen to be pushed toward the ceiling. This position is a stretching pose and can cause undue pressure on the pelvic ligaments as stated earlier.

The boat pose is a core and strengthening pose. This asana is designed to help strengthen the abdominal muscles and is a deep hip flexor strengthening pose. In Sanskrit it means: paripurna = "full, entire, complete" and nava = "boat". This pose is achieved by balancing on your tailbone with your legs spread to shoulder width and elevated so that your toes are even with the height of your shoulders. Arms are stretched out with hands toward toes. You are basically forming a “V” shape with your body while balancing on your tailbone. This position is not an inversion pose, but you are tilting your pelvis (and uterus) upward against the “natural flow” of your period. You are also putting increased strain on the abdominal area.

The plow pose is an inversion pose that is typically good for back pain when you not doing yoga on your period. The Sanskrit name is halasana and means: hal = "plow". To achieve this position, you start by laying flat on your back on the floor. You then raise your legs up over your head, bending them over until your feet reach the floor over your head, while keeping your legs straight. Once again you are positioning your pelvis (and uterus) up. This places additional stress on the abdominal and pelvic areas and is opposite of the “natural menstrual flow”. 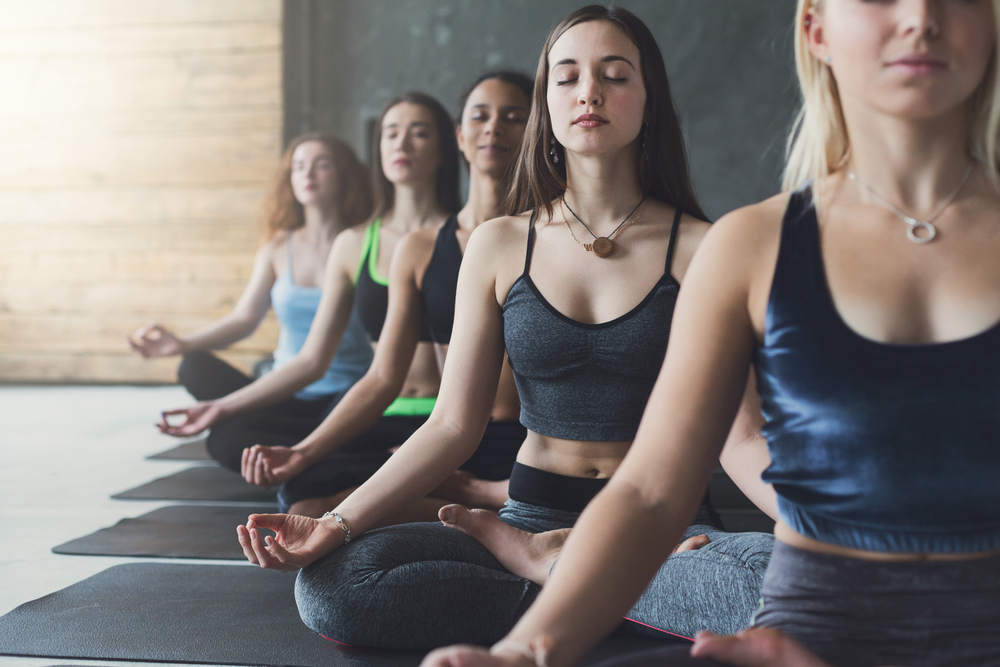 Hygiene products for doing yoga on your period

There are so many different options today for feminine hygiene products. There are tampons, pad, menstrual cups, and discs. The basic word of advice is to use what is most comfortable for you. Many women would suggest that you use a tampon while doing yoga on your period. However, if you have never used them before, this may be distracting or even uncomfortable if not inserted correctly. Remember, you are going be moving into different positions and if your flow is heavy on that day, you may need a little extra protection.

Clothing is important as well. Fortunately, most yoga pants today are available in black or other dark colors. This is good in the event that you leak some. The pants that you choose for your yoga session should be comfortable and not put a large amount of pressure on your abdominal area. This will be better for comfort and overall protection from any undue stress on that area of your body.

One fortunate thing about yoga is that you can practice this form of exercise at just about any age. Studies have shown that it helps to alleviate symptoms related to change in hormonal levels throughout a woman’s life.

But you should be aware that it is very important to consult with a physician before structuring a yoga workout regimen. This way, any concerns or health risks can be laid out on the table before the yoga program is begun, and practice may proceed with safety in mind.

It's a good idea to start your yoga practice with an instructor to make sure you do everything properly.

Clennell, B. (2016). The Woman's Yoga Book: Asana and Pranayama for All Phases of the Menstrual Cycle. Shambhala Publications. Retrieved from https://books.google.com/books?hl=en&lr=&id=CRrIDAAAQBAJ&oi=fnd&pg=PT8&dq=yoga++poses+to+avoid+menstruation&ots=psp9mDdkYC&sig=3-snAD1TQBxLNXY1QMk5OZ5KctY#v=onepage&q=yoga%20%20poses%20to%20avoid%20menstruation&f=false