What causes hiccups in babies

Baby hiccups occur due to the contraction of the baby's diaphragm, along with the prompt closing of the vocal cords. During this process, the air leaves the vocal cords forcefully and creates the sound of hiccups. The exact cause of this isn’t known, but baby hiccups are often linked to eating, drinking, and strong emotions including stress or excitement.

Unlike adults, however, hiccups in babies usually don’t affect them. Many babies are able to sleep uninterrupted during a hiccuping bout, and hiccups don’t interfere with the breathing of the baby.

Your baby may develop hiccups after eating or drinking, especially if they swallow air during the feed (either breastfeeding or formula feeding). Hiccups in newborns may also occur if they overfeed or eat too quickly. All these factors may cause the stomach of the baby to expand, which pushes against the diaphragm and triggers a spasm, leading to baby hiccups.

If your newborn has hiccups frequently and they cause distress, it may be due to gastroesophageal reflux (GER). In this condition, the esophageal sphincter isn’t developed properly and partially-digested food mixed with stomach acid may regurgitate through the esophagus (food pipe). As the stomach content passes through the baby’s diaphragm, it can trigger spasms and hiccups.

What to do when a newborn has hiccups

Hiccups in a newborn usually don’t cause any harm. Unlike for adults, hiccups are less uncomfortable for babies and tend not to provoke any distress. So, what can you do for baby hiccups? Many times, baby hiccups get better by themselves. If the hiccups aren’t disturbing your child, simply leave them to get better on their own. When the hiccups in your baby aren’t due to feeding, you can give him or her a pacifier to suck, which helps relax the diaphragm and stop the hiccups.

How to get rid of baby hiccups

To get rid of baby hiccups, try burping in between feeding and offering the baby gripe water. You may also rub their back or rock back and forth to stop baby hiccups, as this helps the baby to calm down and relax, stopping the spasm of the diaphragm and, of course, the hiccups. Be sure not to hit or slap the back roughly or apply excessive force.

How to stop baby hiccups after feeding 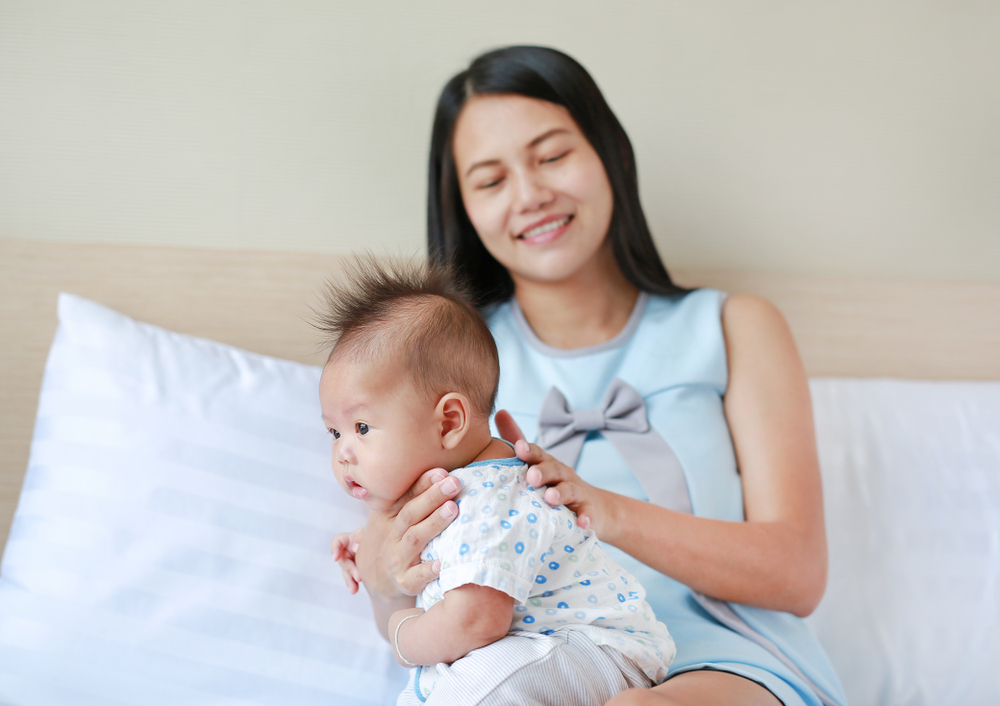 To stop baby hiccups after feeding, you can try the following:

How to prevent hiccups in babies

While there are some ways to help prevent the onset of baby hiccups, it’s difficult to avoid them completely since the cause isn't always known. Try the following ways to prevent hiccups in babies:

Reasons to call a doctor

Hiccups in newborns are usually considered normal until the child reaches the age of one year. However, if your baby hiccups a lot and seems agitated or upset while hiccuping, you should consult a pediatrician as this may indicate other medical conditions.

GER may result in frequent and uncomfortable baby hiccups. Apart from hiccups, the following symptoms indicate that GER may be an issue:

If you suspect that your baby may be suffering from GER, talk to a doctor, as they can easily treat this condition.  You should also talk to a pediatrician if the hiccups are disturbing the sleep of your baby, or if hiccups continue occurring even after your child turns one year old.

Hiccups in babies are a normal occurrence until about the age of one year. Hiccups usually don’t affect babies and they may even sleep through a hiccuping bout. Baby hiccups occur when the diaphragm contracts and the vocal cords promptly close. In a newborn, they may occur after feeding, particularly if the baby swallowed air while feeding, overfed, or fed too quickly. To stop baby hiccups, try burping the baby regularly during feeding, offer a pacifier, or give the baby some gripe water. If your baby hiccups a lot and looks agitated or upset while hiccuping, consult a doctor. This may indicate a medical condition such as GER, which is easily treatable.