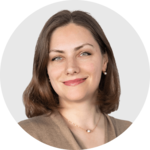 If you’ve been astonished by your baby’s rapid growth and weight gain over the last few weeks, by week 18 this will start to level off a little — but there’s still lots of big news in your little one’s early life! At this stage, he or she can yawn, stretch, and even make facial expressions like frowning. The baby’s sense of taste is developing, and taste buds can now distinguish between sweet and bitter.

While all this is going on, you’ll continue to feel your baby’s movements in your belly.

Stay with Flo for the full breakdown of week 18 of pregnancy!

Your baby at week 18 of pregnancy

Your rounded belly is very noticeable.

Don't get up from a chair or bed too quickly — sudden movements can cause dizziness.

How big is your baby at 18 weeks pregnant?

When you’re at the beginning of your fifth month of pregnancy, you might feel the very first movements of your baby. While he’s trying out his muscles, you also develop intense food cravings. During this time, your baby weighs almost 7 ounces and is 5 and a half inches long — putting him at the size of a cucumber.

There’s still plenty of time to go before the baby can think of coming out the uterine confines. It is, therefore, positioned in a way that the head is still close to the chest and the feet are pointing downwards.

Many of the baby’s reflexes are developing at this stage, including hearing, swallowing, and sucking. They’ll also be moving around a lot, so now’s a good time to start to be more vigilant to any sign of your little one’s arms and legs thrashing around your belly.

Long before this point, your baby will have started to move, but it will have been too small for you to detect any signs. Now that the baby has put on more weight and developed to a more advanced stage, you’re more likely to be able to pick up on any movement.

Even so, don’t expect any dramatic thrashing around: fetal movement at 18 weeks feels more like bubbling or fluttering sensation than anything more substantial.

Your body at week 18 of pregnancy

Some women can feel a little clumsy as their belly and breasts grow in size, but this is entirely normal; you’ll probably feel more yourself as the weeks roll by. You may also notice that you feel dizzy every now and then, and this is because your blood pressure is likely to be lower than before you became pregnant. This is nothing to be concerned about, but be careful to move slowly when standing up as you may feel a little faint.

Among the strange things you’ll notice over the course of your pregnancy, it’s around this time that the linea nigra appears — this is a dark, vertical line that appears on your abdomen and will probably disappear a few months after delivery. It’s nothing to worry about and is simply the result of skin pigmentation.

Even if you’ve been lucky enough not to show much belly for most of your pregnancy, at this point you’re probably feeling pretty huge! Your uterus is now around the size of a cantaloupe. You may be able to feel it just below your navel.

During this phase of pregnancy, it’s common for women to experience abdominal pain. This can occur for a variety of reasons, including constipation or wind. It can also result from your abdominal ligaments stretching as they support the increased demands of your growing uterus. Many women also suffer from headaches at this point in a pregnancy.

Both abdominal pains and headaches are common symptoms of pregnancy — most cases are completely benign and pose no threat to you or your baby. However, some cases are serious and will require further medical investigation. You need to be alert to these causes so you can respond promptly if necessary.

Seek immediate medical advice if your abdominal pain is accompanied by any of the following symptoms:

Similarly, you should consult a health professional if your headache is accompanied by any of the following symptoms:

18 weeks pregnant ultrasound: do you need it?

If you’re like most women, you probably had your first scan between weeks 8 and 14. This is usually followed by another scan at 18-21 weeks. This is sometimes referred to as a dating scan because it will give you a reliable idea of your expected due date (EDD) and also confirm how many babies you’re carrying!

Some healthcare professionals may also refer to this as an anomaly scan — this is because it allows a detailed view of your baby’s appearance and overall development. It can pick up on a wide range of conditions, but not all of them. If you’re unsure of the benefits of this type of scan, your practitioner will be able to advise you fully and this can help you decide whether or not to request the scan.

In addition to scans, you should also be aware that screening tests for a number of serious developmental disorders (including Down’s Syndrome) are available to you at this stage. Your healthcare provider has probably already mentioned this to you and put things into motion, but if not feel free to flag it up and ask what arrangements need to be made.

Your pregnancy may be a challenging time for you, but do your best to follow a healthy lifestyle. This will provide the best support for you and your baby until full term. Your diet should contain a wide variety of foods from all the recommended food groups, including a mixture of fresh fruit and vegetables whenever possible. You should also aim to drink between 8 and 10 8-ounce glasses of water (from all sources) unless your doctor recommends otherwise.

Sex at week 18 of pregnancy

Some couples enjoy regular sex throughout pregnancy, while others don’t feel that they want to. During this phase of your relationship, you may want to explore alternative ways to make love or be loving towards one another. The important thing is to discuss your feelings with each other and communicate openly.

What to expect at 18 weeks pregnant – checklist