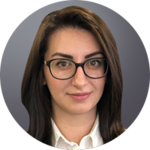 You’re 15 weeks pregnant now, and time has gone by so fast! Just a few weeks ago, your baby was the size of an apple seed and its organs were just beginning to form. Now, however, your baby is the size of a whole apple, and he or she is already swimming around in amniotic fluid. You’re approximately three and a half months pregnant by week 15.

It’s not just the baby that’s changing. During your first trimester, you probably didn’t gain that much weight and your baby bump was barely noticeable. But as the baby gets bigger and bigger inside your belly, your body will start to change faster than ever. Pretty soon you’ll be feeling your baby’s kicks and somersaults, and in the blink of an eye, you’ll be getting ready to meet them!

Your baby at week 15 of pregnancy

Your baby has come a long way in only a few weeks. A 15-week fetus is already swimming up a storm inside your womb, even though most moms will only start to really feel these movements around week 20. In other exciting news, your baby’s bones are starting to ossify — meaning that they’re absorbing calcium and getting stronger. 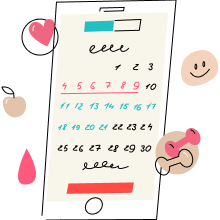 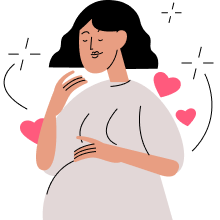 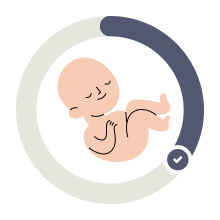 Your baby weighs about 2.5 oz (70 g) and is able to respond to light, although his/her eyes are closed. Their eyelids will remain shut for a few more months, and their facial features are becoming more defined each day. The ears have almost risen to their proper place, and the eyes are moving from the sides of the face to the front.

How big is your baby at 15 weeks pregnant?

Your baby is around the size of an apple or a navel orange. It measures around 4 inches (10 cm) from crown to rump. It weighs approximately 70 grams, which is equivalent to 0.15 pounds. Baby weight at 15 weeks is similar to the weight of one chicken egg!

Your baby at 15 weeks pregnant has already formed all its vital organs, so now it’s time to grow bigger and stronger. Among the milestones of week 15 of pregnancy fetal development is the beginning of bone ossification. The muscles are strengthening, and the bones are becoming harder. By now, the baby has longer limbs and can move its joints. Although it’s not common, some women can feel baby movements at 15 weeks pregnant!

Your baby is also practicing how to breathe outside your womb. He/she is actively drawing in amniotic fluid through his/her nose. It is getting into the upper respiratory tract, developing the lungs. The baby’s skin is still very translucent, and small blood vessels are forming under it. Your 15-week fetus is also practicing other reflexes, such as swallowing and sucking.

At 15 weeks of pregnancy, your baby is also looking much cuter, since its head is now proportional to the rest of its body. Their skin is getting covered in very fine hair, which is called lanugo and helps keep the baby warm. In the womb, a 15-week baby is also able to hear your voice. Make sure you talk to your baby constantly!

Your body at week 15 of pregnancy

Since your baby is getting bigger with each passing day, it’s only natural that your body makes changes to adjust to the little person that’s growing inside of you. By week 15 of pregnancy, you’re out of the first trimester and your early pregnancy symptoms have most likely subsided. But that doesn’t mean that you can’t experience any 15 weeks pregnant symptoms! It’s also normal to find that your bump is growing much faster now.

During the first 12 weeks of your pregnancy, your growing uterus was still contained inside your pelvis. But now, your uterus has become too large to fit inside the pelvis, and so it begins to grow upwards. That is why at 15 weeks pregnant, you’ll probably realize that you’re looking much more pregnant than before.

The size of your 15 weeks pregnant belly will largely depend on how many pregnancies you’ve had. If this is your first pregnancy, your abdominal muscles haven’t been stretched before, so it might take longer for you to develop a proper baby bump. But if you’ve had previous pregnancies, these muscles are more lax and you’ll be showing more of a 15 weeks pregnant bump.

Your bump could also start to show a dark line running from your belly button to your pelvis around this time. This is a symptom called “linea nigra”, and it’s perfectly normal amongst pregnant women. It will fade after delivery, so there’s nothing to worry about!

Since your baby needs nutrients to get bigger and stronger, the second trimester will bring more weight gain than the first. Doctors recommend eating approximately 300 extra calories each day for a weight gain of 1 pound each week. During week 15 of pregnancy, your uterus is halfway between your pubic bone and your belly button, and you should be able to feel it if you press down on this area.

Those uncomfortable first trimester symptoms have probably gone away by now, but that doesn’t mean that you won’t be having any 15 weeks pregnant symptoms. These are some of the most common symptoms during week 15 of pregnancy:

15 weeks pregnant ultrasound: do you need it?

Your doctor might not schedule an ultrasound for you this week, especially since you probably had your first-trimester ultrasound recently. However, moms who are carrying high-risk pregnancies might have an ultrasound appointment.

If your pregnancy is high-risk, your doctor could recommend getting an amniocentesis between weeks 15 and 20. If you do get an amniocentesis, the doctor will use ultrasound to guide a thin needle into your womb and collect a sample of amniotic fluid. They’ll later test this fluid to detect genetic disorders, such as Down syndrome.

If you do get a 15-week ultrasound, it’s possible that your doctor could determine the baby’s gender. But in some cases, the position of a 15-week baby hides its external genitals. If this happens, don’t worry. Your doctor will try again during your next ultrasound.

Sex at week 15 of pregnancy

It’s quite common for your libido to increase after your early pregnancy symptoms go away. You’re not nauseous anymore, you have more energy, and your bump is still small enough to allow most sex positions comfortable. Take advantage of this time and get intimate with your partner if you want to — pretty soon, your bump will make some positions practically impossible.

What to expect at 15 weeks pregnant – checklist