It is, however, common to experience some light spotting that’s dark brown or light pink during early pregnancy.

Pregnancy with a period: Is it possible?

While some women may experience intermittent vaginal bleeding while they are pregnant, it isn’t possible to have a period. Menstruation only takes place in the absence of pregnancy.

So, can you have a period while you’re pregnant? The short answer is no. Since women don’t ovulate — or release an egg — during pregnancy, they will not get their monthly period.

How rare is it to be pregnant and have your period?

As already stated, despite all the claims, it isn’t possible to get your period while pregnant. Once the body starts the production of the pregnancy hormone, human chorionic gonadotropin (hCG), your periods stop.

I have never felt the need to write a review for any app, but this one deserves recognition. I never used to track my period and I ended up needing to have a blood transfusion because I was bleeding so much for so long. But when I downloaded Flo, It has helped me in so many ways. It has always been accurate, and gives me insight on the symptoms Ive been having on my period, and I can keep my symptoms logged so that I can show my doctor what was going on during my last period. It’s a really useful and helpful app.

Why you might experience a “period” during your first trimester

Though women stop getting their period during pregnancy, it’s possible that they may still experience some bleeding. This bleeding does not necessarily indicate an underlying issue, but it’s important to understand the cause of it — and whether you should see a doctor.

Bleeding tends to occur more often during the first trimester of pregnancy than the second or third. Estimates suggest that about 25 to 30 percent of pregnant women experience spotting at some point during their first trimester. There are a number of reasons for this bleeding.

Implantation bleeding: this refers to the light spotting that occurs about 10 to 12 days after conception, around the time when your period is due. Many women haven’t yet taken a pregnancy test at this point, so it’s easy to mistake the spotting for a period. This bleeding is lighter than a normal period, however, and only lasts for a couple of days. It occurs due to the implantation of the fertilized egg into the uterine lining.

Cervical changes: spotting can occur shortly after you get pregnant due to cervical changes, particularly after having sexual intercourse. As long as no infection is present, there’s no need to be concerned about this.

Other causes: heavier bleeding that more closely resembled a period during the first trimester of pregnancy can indicate something more serious, including:

These are all medical emergencies, and it’s important to see a health care professional immediately. They are often accompanied by symptoms other than bleeding, including: 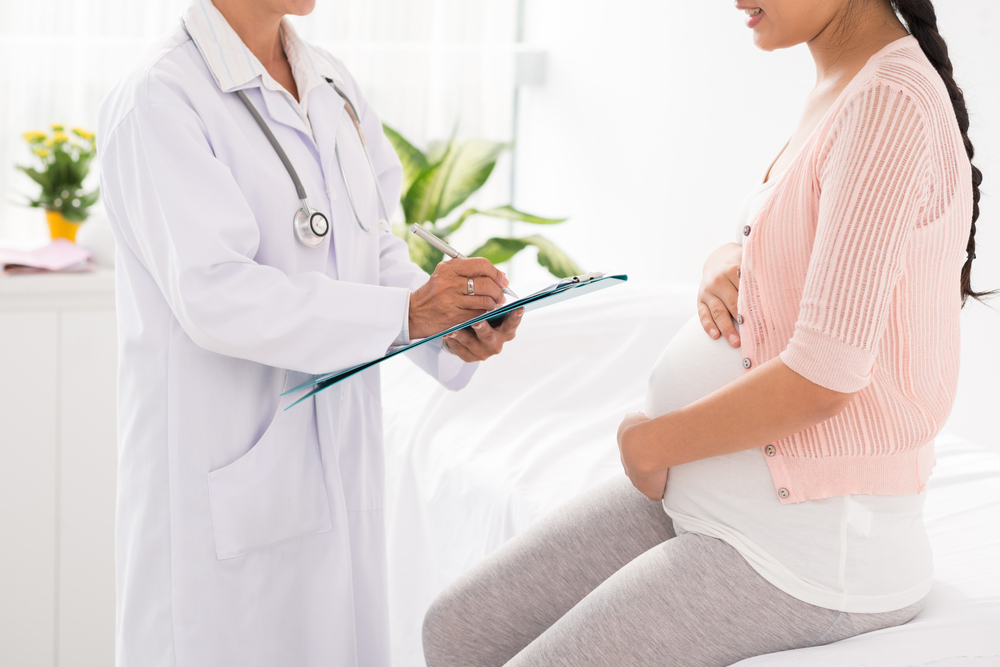 Bleeding later in the pregnancy: why it happens

We’ve already discussed why it isn’t possible to have a period during pregnancy, and why some women may experience light bleeding or spotting during their first trimester.

Bleeding during the second and third trimesters is possible, though not common, and it may be an indicator that something else is going on. If you experience bleeding later in your pregnancy, it’s important to see your doctor.

Potential reasons for mid- or late-term pregnancy bleeding include:

Bleeding in the second and third trimesters can also lead to termination of pregnancy or, more rarely, be a sign of vasa previa.

When you should see your doctor

Since you can’t get your period while pregnant, it’s important to be mindful of any bleeding you do experience during this time. While light bleeding or spotting during the first trimester is usually nothing to worry about, bleeding that is accompanied by other symptoms may indicate something more serious, and you should see a doctor immediately. These symptoms include:

You should also visit your doctor if your bleeding is bright red in color and is heavy enough to soak through a pad. Pelvic pain and vaginal bleeding in the early stages of pregnancy may indicate an ectopic pregnancy. If you suspect this, see your doctor as soon as possible.

There’s a lot of discussion surrounding pregnancy and periods, and we want to clear things up. Can you have a period and be pregnant? No. Since your period stops after your body starts producing hCG — also known as the pregnancy hormone — it isn’t possible to experience a true period during pregnancy.

During the early stages of pregnancy, however, some women experience spotting or light bleeding — and it’s usually normal. This bleeding is called ‘implantation bleeding,’ and it happens when the fertilized egg implants in the uterine lining.

First trimester bleeding that happens alongside other symptoms (like dizziness or pain) may indicate a more serious issue, like an ectopic pregnancy, infection, miscarriage, molar pregnancy, subchorionic hemorrhage, or cervical changes. If you suspect an underlying cause for the bleeding, it’s important to seek out immediate medical attention.

It’s also possible for women to bleed during the middle and late stages of pregnancy. This bleeding is less common and may indicate a medical emergency such as preterm or term labor, placenta previa, placental abruption, or uterine rupture. Having sexual intercourse during these later stages can also cause bleeding, though it’s usually quite light.​

If you experience bleeding as well as symptoms like cramping, pain, fainting or dizziness, passing clots or heavy bleeding, and severe pain in your pelvis and stomach, be sure to see your doctor right away.

Period Menarche: Key Facts About Your Daughter’s First Period
Period Dysmenorrhea: The Reason for Your Painful Periods
Period How Deep Is a Female Vagina? The Average Depth of a Vaginal Canal
Period Hymen: What It Is and How It Changes Throughout Your Life
Period Period Tracker: How to Choose One and Why Logging Is Important
Period Using the Pill to Regulate Periods: How It Works
Period Menstruation Taboos Around the World: How Did Periods Become Taboo?
Health What Is the Public Effect of Endometriosis?
Health Birth Control and Cancer: Is There a Link?